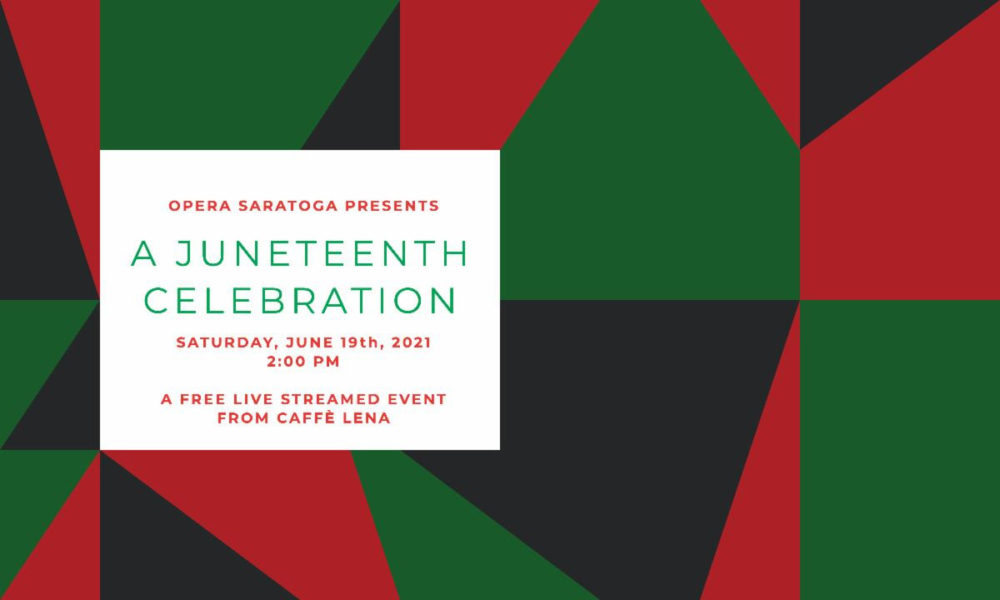 Juneteenth, which is celebrated on June 19th annually, commemorates the day when federal troops arrived in Galveston, Texas in 1865 to take control of the state and ensure that all enslaved people were freed. The arrival of troops came two and a half years after the signing of the Emancipation Proclamation. Confederate General Robert E. Lee had surrendered at Appomattox Court House two months earlier in Virginia, but slavery had remained relatively unaffected in Texas—until U.S. General Gordon Granger stood on Texas soil and read General Orders No. 3: “The people of Texas are informed that, in accordance with a proclamation from the Executive of the United States, all slaves are free.” Juneteenth honors that day - the end of slavery in the United States.

To celebrate this important holiday, Opera Saratoga will return to Caffè Lena on June 19th for A Juneteenth Celebration as part of AMERICA SINGS, the company’s free concert series that was created to amplify the voices of artists from racial groups historically underrepresented on the concert stage. The program was curated by bass-baritone Carl DuPont, a distinguished alumnus of Opera Saratoga’s Young Artist Program who is now on faculty at Peabody Conservatory where he teaches voice and a survey course on Art Song by African American Composers.

“In America we have de jure and de facto legal and government systems,” explains Dupont. “Juneteenth is the crystallization of that for me. Although The Emancipation Proclamation was issued two years prior to Juneteenth (de jure) the actual emancipation of those citizens in Texas (de facto) didn't happen until two years later. This holiday is a reminder of how stubborn structural racism can be, and how indomitable the persistence of the human spirit remains.”

In putting together the concert program, DuPont has included prose and poetry – along with an extraordinary selection of music by African American composers - to create a more comprehensive texture of why we celebrate Juneteenth. Musical selections include songs by H. Leslie Adams, Tim Amukele, Margaret Bonds, Uzee Brown, Moses Hogan, Betty Jackson King, Rosephanye Powell, Florence Price, and Hale Smith. Spoken word selections include excerpts from The Declaration of Independence, The Emancipation Proclamation, and The General Orders which actually notified the enslaved people that they were free. The program will also include first-hand diary accounts and poetry from formerly enslaved people, as well as newspaper copy of the observation of the first Juneteenth celebrations.

The program will be performed by Festival Artists from Opera Saratoga’s Young Artist Program, who include notable emerging Black singers alongside artists who come from a wide range of other racial backgrounds, many of whom are learning more about Juneteenth through the experience of putting together this program. “I am glad that the performers at this concert represent a wide variety of racial backgrounds,” added DuPont “some of whom might be performing art songs by Black composers for the first time. Many of the members of the concert-going public will also be hearing these wonderful songs for the first time. That will be a special moment, and I hope the singers feel inspired to continue to advocate for Black composers as well as other marginalized composers, themes, or causes in their careers. And, I hope the audience gains a window into the faith, hope, joy, dreams, suffering, consolation, and frustration of the Black American experience and of our shared history as a nation.”