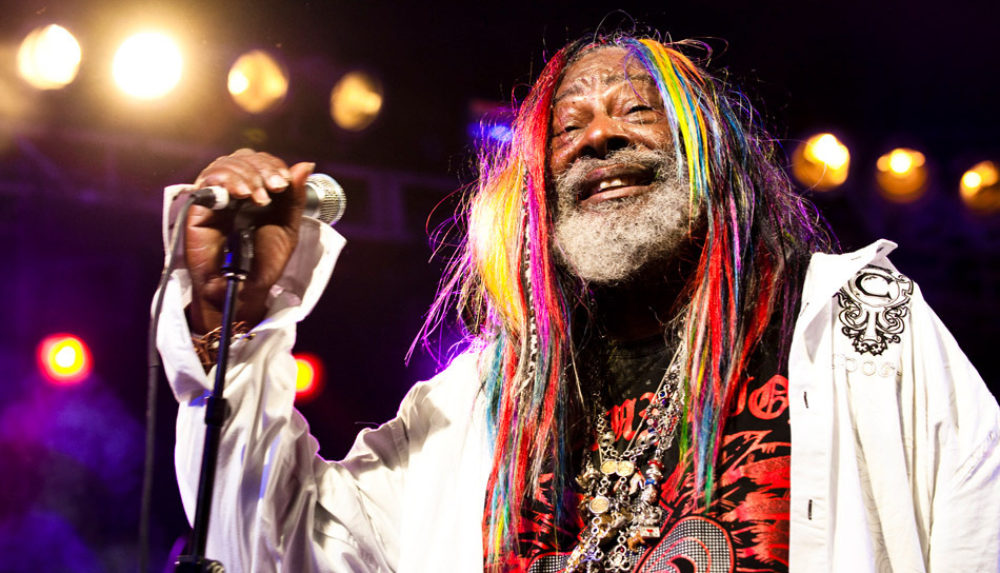 The Parliament/Funkadelic machine ruled black music during the ’70s, capturing over 40 R&B hit singles (including three number ones) and recording three platinum albums. Born in Kannapolis, NC, on July 22, 1941, Clinton became interested in doo wop while living in New Jersey during the early ’50s. Basing his group on Frankie Lymon & the Teenagers, Clinton formed The Parliaments in 1955, rehearsing in the back room of a Plainfield barbershop where he straightened hair. The Parliaments released only two singles during the next ten years, but frequent trips to Detroit during the mid-’60s – where Clinton began working as a songwriter and producer – eventually paid off their investment.

Clinton has received a Grammy, a Dove (gospel) , and an MTV music video awards, and has been recognized by BMI, the NAACP Image Awards, and Motown Alumni Association for lifetime achievement. Clinton’s Partliament/Funkadelic was inducted into the Rock and Roll Hall of Fame in 1997.

In reviewing Clinton’s illustrious career and success as a producer / writer/ performer, perhaps his greatest achievement stemmed from his relentless dedication to funk as a musical form. Funk as a musical style had been around for what seems like forever, deeply rooted in the music traditions of New Orleans and the Blues of the Deep South. Following the lead – and commercial success – of James Brown and Sly Stone, Clinton took Funk to new heights, blending elements of Jazz, Rock, Pop, Classical and even Gospel into his productions, eventually developing a unique and easily identifiable style affectionately called “Pfunk.” Clinton’s inspiration, dedication and determination resulted in the elevation of “funk” music to complete recognition and acceptance as a true genre in and of itself.